How to Setup Genre based AutoDJ 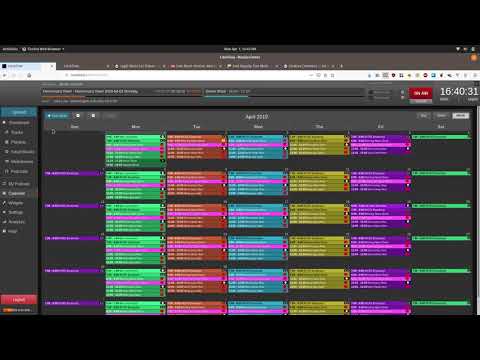 In this tutorial we will focus on how to build a traditional auto DJ system where we use a feature called smart blocks and auto loading playlists to play random music tracks of a certain genre during a show. This tutorial is primarily focused on program managers but users who are DJs can also benefit from smart blocks but will only be able to manually schedule them.

So for the purposes of this tutorial we are going to assume that you have uploaded a number of files of music with the genre metadata all matching a specific genre, for instance, Alternative. This can be done ahead of time, but LibreTime has no way of automatically grouping sub genres and so it is important that you spend some time curating the track metadata before you upload it to LibreTime as there is not currently a way to bulk edit tracks from inside LibreTime. Also once tracks are uploaded the metadata of the track itself isn’t changed but just how it is represented in the LibreTime database. This might change in the future but would only affect you if you were downloading tracks and uploading them to another instance and hoped that the changes you made were saved.

So we can bulk upload a number of creative commons licensed tracks that have their genre all set to specific genres as one way of getting tracks if you don’t have a mp3 collection of your own to draw from. See links below for some spots where you can procure tracks where the creators gave permission for everyone to redistribute play and share them.

One the tracks are uploaded to the system and imported we can now create a smartblock that will select the tracks that match a certain genre. For this we will use Genre contains Jazz – this will match any track that has genre anywhere in its genre so ‘big band jazz’ and ‘swing jazz’ would match as well as ‘acid jazz’. Any subgenre that doesn’t include jazz explicitly such as ‘be bop’ would need to be added as a new modifier.

For the purposes of this smart block we want to select 4 random items. We also want to avoid really long tracks that are longer than 10 minutes. So we will add the modifier Length is less than 00:10:00

and now this smart block will pull 4 smart blocks. Be sure to preview it to make sure that you have some matches in your library. This will also save it.

Now we are going to create a new smart block that plays one promo or station ID.

Click smartblock and new and then type in the name promo OR ID and then change the criteria Genre to is promo and now click new modifier and then is TOTHID.

And then change limit to 1 items.

Now we are going to create a playlist that contains these two smart blocks.

and then click smartblocks and add the Jazz Songs followed by the Promo or ID smart block.

This is a quick and easy way for you to manually schedule a large chunk of time. You can also use this as an autoloading playlist.

Lets assign this to a new 3 hour show. Called lots of Jazz. Now lets go under Autoloading Playlist and enable that and in this spot we will check repeat until full. This will mean that the system will keep scheduling this playlist until the show is completely full. The only problem here is that at the end of the show it is almost assured that a track will be cut off. If you are a web station and you just want to schedule music for long lengths of time you can schedule shows that are up to 24 hours long.

On the other hand if you are an FCC licensed station you are required to have top of the hour IDs as close as possible to the top of the hour. In this case the random selection of tracks might not suffice for compliance.

If you have a station ID playlist smartblock in your intro playlist (see previous tutorial linked below) and you have your tracks broken up hourly this shouldn’t be an issue but it still might result in tracks being cut of in the middle.

So the best option currently is to change the music tracks to fill the remaining show from the previous selection of 3 items. And then be sure to add a promos or musical sound bridges at the end that are also time remaining but allow overfill.

It is possible that we could improve the way the autoloading playlists work in the future, please check out LibreTime.org for the latest release notes and feel free to ask any questions at our forum at https://discourse.LibreTime.org

Thanks for tuning in to another LibreTime tutorial. Our next tutorial will show you how to use autoloading playlists to add show specific underwriting or advertisements.